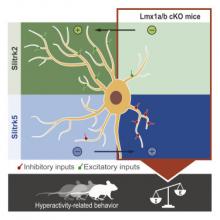 The cellular mechanism uncovered by the researchers could explain the mode of action of Ritalin in humans. The drug is believed to block the reuptake of dopamine by neurons, thereby prolonging the effects of this neurotransmitter.

Although about one in 10 people will suffer from attention deficit hyperactivity disorder (ADHD) in their lifetime, the cellular causes of this health problem are still very poorly understood. A study published in Cell Reports by a team from Laval University's CERVO Research Centre now sheds some light on the subject. The researchers were able to determine which type of neurons are involved in the development of hyperactivity in mice and the cellular mechanisms involved. This breakthrough suggests a plausible mode of action for Ritalin, a drug widely prescribed for ADHD, but whose mechanism of action is unknown.

Study leader Martin Lévesque says ADHD is attributed to problems during embryogenesis and early life, when connections are made in the neurons that produce dopamine. This neurotransmitter is involved in pleasure, attention, reward and movement. The human brain contains tens of billions of neurons, but only about 500,000 of them are dopaminergic neurons," he says.

In the article published by Cell Reports, Lévesque and colleagues show that pharmacogenetic inhibition of dopamine neurons during the first weeks of life in mice - which corresponds to early childhood in humans - quickly leads to hyperactive behaviour. "These mice travel twice as far as control mice in the same time period," says the researcher.

When the same experiment is repeated in adult mice, the researchers observe no effect on locomotor behaviour. "At the beginning of life, the brain is very malleable and a disturbance in the activity of dopaminergic neurons during this period has repercussions on later behaviour," explains Professor Lévesque.

The researchers' work has made it possible to identify the role of two proteins - Slitrk2 and Slitrk5 - in the development of dopaminergic neuron connections in mice. Slitrk2 promotes the formation of excitatory synapses that increase motor activity, while Slitrk5 does the opposite, says Dr. Lévesque. "An imbalance between the excitation and inhibition of dopaminergic neurons during connection development leads to hyperactivity in mice." It's not known what could cause such an imbalance in humans, but a combination of genetic and environmental factors, such as pesticide exposure, could be the cause.

(Translated by CERVO with deepl.com)

Read the original article by Jean Hamann (in French) here: