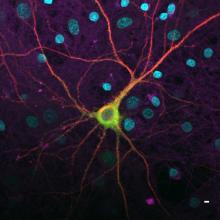 A team of 14 researchers from 6 Canadian universities has been awarded $4.3M to develop genetic, optical and viral tools that offer new insights into the study and treatment of neural disorders. These tools could one day benefit people suffering from diseases such as Parkinson's, epilepsy, chronic pain and certain types of blindness or deafness.

"This is an effervescent area of research where things are progressing very quickly. We should see the emergence of clinical applications of these technologies in the next decade," says Marie-Eve Paquet, a member of the Université Laval research team involved in the project.

These technologies are based on the idea that it is possible to selectively activate or inhibit the neurons involved in certain neurological disorders. To achieve this, the researchers use viruses that have been stripped of their pathogenic potential, but which have retained their ability to inject genetic material into the cells of a host. These viral vectors are used to deliver genetic information into targeted populations of neurons. This information is used to produce light-sensitive proteins that, when exposed to a selected wavelength of light, activate or inhibit the neurons in which they are located.